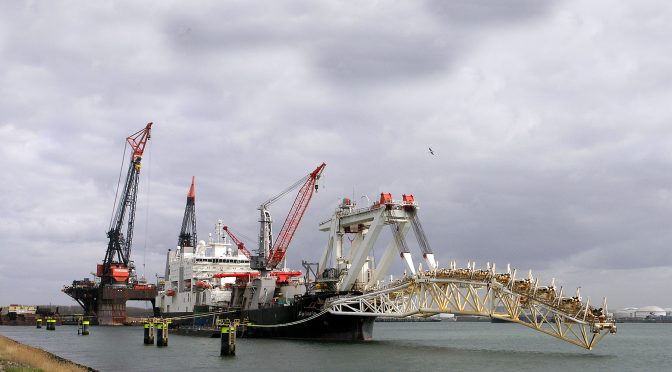 In 2006′ Allseas’ bought the ship ‘Geeview’, which was delivered as a bulk carrier in 2005. ‘Allseas’ had the ship converted at Keppel Verolme (Rozenburg) into a deep-sea pipelayer. At that time the largest pipelayer in the world. GustoMSC was involved in the basic design, which was developed by ‘Allseas’ for conversion from bulk carrier to pipelayer. The biggest, apart from other engineering tasks, visible participation of GustoMSC is the SHF (Stinger Handling Frame), which was largely built in the bow. The HSF can determine the angle at which the stinger is sunk into the water. In 2007 the ‘Audacia’ was delivered to ‘Allseas’. In the photo, she is moored in the Calandkanaal. END_OF_DOCUMENT_TOKEN_TO_BE_REPLACED